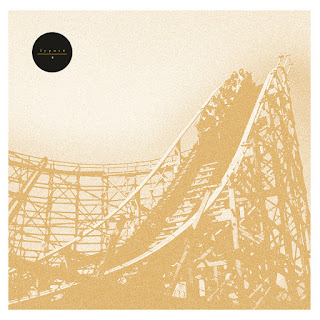 
These guys from Germany play new-school screamo that fluctuates between blistering blast beats with noisy, textured chord-work, and clean, bright picked sections. There's a similar contrast in vocals too, often favouring multiple layers of screaming, but they're actually surprisingly good clean singers too; they can harmonise really well, sometimes reminding me of a less wild version of HUMAN HANDS or even THURSDAY, but also surprising me in the first track by having an almost indie-sounding chorus. A couple of tracks in the middle break up the tone a little, with 'A Lost Harmony' bringing in some different influences, sounding more like the post-rock of TALONS, but with some deeper, almost doomy vocals, and 'Growing' adds a slower, delay-driven guitar sound, with a gang-vocal dominated ending. These are then followed by an instrumental post-rock-style track, before breaking back into the emo / screamo sound we're used to hearing from them. So yeah, pretty varied stuff; if you already listen to a lot of European screamo, you'll recognise the kind of sound this has, but expect more clean brightness than cathartic aggression. As well as the bands already mentioned, if you like stuff like TITLE FIGHT and I guess stuff like LOMA PRIETA then this might do it for you. 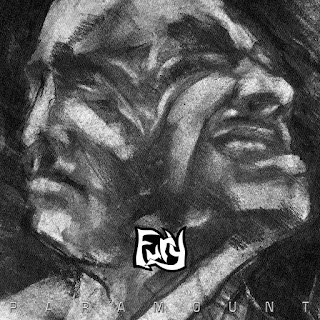 
Every now and again, a hardcore band comes along that just does it right (I'm thinking HAVE HEART, EXPIRE, xREPENTANCEx, etc.) and FURY are one of those bands. They basically sound like all of the best 90s REVELATION RECORDS hardcore bands smushed together; fast, heavy and angry both musically and vocally, think YOUTH OF TODAY and GORILLA BISCUITS but with a really solid, up-to-date production. 'Death Yellows Life and Reason' pretty much sounds like a perfect mix of BOLD and BATTERY. Yup, it's that good. Lyrics are more personal than political as far as I can tell, and expect lots of break-neck drumming, palm-muting, and solid riffs, while 'In Extremis' brings a slight change of pace, working with heavy repetition. I recommend checking out 'Damage is Done' or 'The Fury' for something to go on, but if you like the aforementioned bands, you'll love every second of this. I also have to give them extra credit for listing SHAKESPEARE and VONNEGUT in the lyrics credits. Awesome. 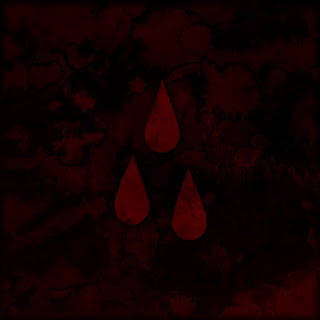 
So, me and Nat are both long-term AFI fans, so I always feel the need to at least have a good listen to anything they put out. They've divided a lot of people since probably around 'Sing the Sorrow', when they started to drop the speed and aggression in favour of drama and theatrics, and they've continued to develop the latter for the past few albums since. Personally, I like that AFI change and grow with each album; their respective members are too creative to be the kind of band that churns out the same sounding stuff every couple of years, and I have a lot of respect for them for perpetually evolving over twenty years of being a band (my favourite albums are still 'The Art of Drowning', 'The All Hallows' EP, and 'Sing the Sorrow' though). So, this album sounds mostly like 'Crash Love'; it's not as dark, electronic, or mechanical sounding as their last effort 'Burials', but still retains that almost pop-rock sound that they tend to favour now. Don't expect much speed, but you'll find plenty of variety in dynamics; 'White Offerings' is the most aggressive of the bunch (and vaguely reminds me of 'The Leaving Song Part 2'), there are some upbeat catchy numbers like 'Hidden Knives', as well as some slower, moodier tunes like 'She Speaks the Language'. 'Pink Eyes' is a banger as well. Davey Havok is still a great vocalist; his balance of singing and shouting (of which the pitch of the former and harshness of the latter have both softened into a narrower but pleasant medium) definitely suits the scope of sounds on here, and Jade's general creative-wizardry is as wide and impressive as ever. Not sure if I imagined it, but I thought I heard lyrics touching on religion and gender-identity too, so that's cool. I think everyone misses old AFI, but if your music taste extends beyond punk and hardcore, and you're willing to give it a chance, there's plenty to enjoy on here. 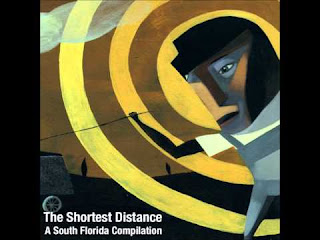 
So here's a long story. In the early 00s, VICTORY RECORDS released a DVD called 'Release: A Punk / Hardcore Documentary', featuring interviews with lots of bands (including SICK OF IT ALL, FACE TO FACE, YUPPICIDE, IGNITE, WESTON, EARTH CRISIS, AGENT ORANGE, etc.) talking about punk scenes at that time. As well as being a generally cool little documentary, two things really stood out for me: the song over the end credits (which, after some research I discovered was the phenomenal 'Picks' by a band called QUIT), and an interview with a seventeen year old called Amy who briefly chronicled putting on a release show for the first 7-inch that she was releasing on her label.

For years after watching the doc., I listened to QUIT online, and 'Picks' has since become an all time favourite tune (I won't gush too much here, but just hearing the opening chords makes my eyes water), but it wasn't until last year that I decided to see if anything more came of Amy. A couple of Google searches later and I discovered that her label, FIDDLER RECORDS had gone on to put out tonnes of amazing stuff, and were pretty much the catalyst for the success of bands like NEW FOUND GLORY and THE BLED. She'd also recently written a novel called 'A Million Miles' about a girl who was running her own label and going on tour with a band who's record she was putting out.

Inevitably I got in touch with Amy pretty sharpish and ordered not only a compilation that she'd put out in the late 90s that exclusively featured 'Picks' by QUIT, but also her novel and a tee (and a very small hoody). Given that I'd pretty much ordered the comp for one song, I was curious but wouldn't mind if the rest of the tracks didn't hit me quite as much. Boy, was I in for a shock; it very quickly became a favourite compilation (and I've listened to a lot of comps). Just like 'Picks', every track on it pretty much gels perfectly with my music taste; fast, super melodic skatepunk / melodic punk-rock that has that pure energy and rawness that you just don't get with FAT WRECK and EPITAPH bands. There are early tunes from NEW FOUND GLORY, CHRIS CARRABBA (of DASHBOARD CONFESSIONAL) and his early band VACANT ANDYS (who were the band on Amy's first 7-inch), some more perfect melodic punk tunes from MILKSHED, DAN'S ARMY, PIVOT, ANCHORMAN, GOING NOWHERE, and ONE + ONE (love that guys vocals), the odd harder tune from bands like LAST MINUTE, and even some ska from POOPY PANTS and KING 7 AND THE SOULSONICS.

I've only listed about half of the bands here, but if you're into real skatepunk, every second of this will be perfect for you; I couldn't recommend it enough. I think the artwork is done by that guy who did loads of stuff for HOT WATER MUSIC too. Sometimes it's hard to get into new stuff as you get older, but this comp from 1998 blew me away in 2016. You can grab it from FIDDLER RECORDS or listen to the whole thing on Youtube. I can also highly recommend Amy's novel 'A Million Miles'.
Amy, you are awesome.

'Hang In There: A DIY Covers Compilation' review 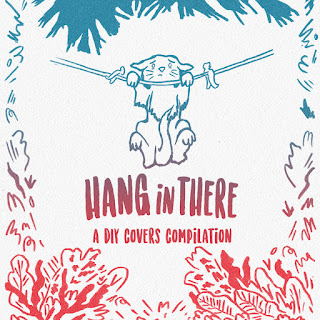 'Hang In There: A DIY Covers Compilation' review


"This is a compilation that was put together by FOR THE SAKE OF TAPES to raise money for the mental health charity 'Mind', and it's easily one of the best ideas for a comp I've ever seen; all of your fave DIY / lo-fi punk bands doing covers of pop tunes from the 80s to present day. As soon as the comp started with TWO WHITE CRANES' acoustic take on BLINK 182's 'Adam's Song', followed by a great version of CHRISTINE AND THE QUEENS' 'Tilted' by SUGGESTED FRIENDS, and WOLF GIRL doing a dreamy cover of 'I'm Not Okay' by MY CHEMICAL ROMANCE, I knew this was going to be a comp that I'd love. There are twenty-three tracks of similar brilliance here, with covers of HOLE, LE TIGRE, and BIKINI KILL by LITTLE FISTS, TOUGH TITS, and DREAM NAILS respectively, as well as pop bangers from KATY PERRY, SEAL, and THE BANGLES by FAGGOT, EMMA KUPA & ANKLES McGHEE and FIGHTMILK. The whole comp is bloody brilliant from start to finish to be honest, but my faves are CAT APOSTROPHE doing ROBYN's 'Dancing On My Own' (it probably helps that I love ROBYN, but this cover is darn good), JESUS AND HIS JUDGEMENTAL FATHER's cover of SHANIA TWAIN'S 'That Don't Impress Me Much', DANIEL VERSUS THE WORLD's absolutely stunning version of ERASURE's 'A Little Respect' (I literally couldn't believe how good this was), and THE POTENTIALS' cover of CHER's 'Believe', pretty much because they put some of that auto-tuning from the original on the vocals in the bridge / chorus and it made me cry with laughter. So yeah, an awesome comp for a great cause that you should check out now if not sooner."

So yeah, Lee's doing another band; this one's called South Ghost and they've just uploaded their first tune to Youtube; it's got lo-fi neon woodsy synth-pop vibes, so if that sounds like your thing, feel free to give it a bash! 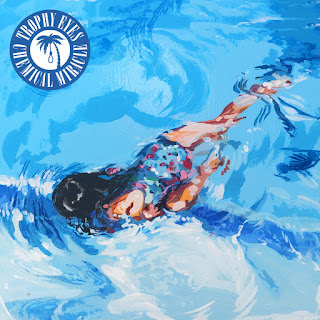 
So these fellas from Australia play that big pop-punk crossed with new post-hardcore type thing, a bit like like BASEMENT and TURNOVER but a fair bit heavier (it might sound silly, but in places it even reminds me of SOILWORK's catchier stuff), and it's actually damn good; the contrast of styles is perfectly balanced, so we get some nice heavier tones and sections ('Rain on Me' is pretty blistering in places), but the anthemic choruses are also here in full force and had me from the first or second listen ('Nosebleed' and 'Breathe You In' especially), and the tracks 'Chemical' and 'Miracle' (see what they did there?) work as shorter, almost interlude type tracks, the latter of which is really touching. The last track is also an absolute beaut; I couldn't get the line 'I've got friends, but they don't love me like I love them' out of my head for a long time after hearing it. The lyrics to this album are quality throughout actually; really touching and quite harrowing in places. Favourite tracks for me are 'Home Is' and 'Suicide Pact' which are both incredible and probably a good representation of what you'll find on the rest of the album. Loved this far more than I thought I would, and can't help but highly recommend it.